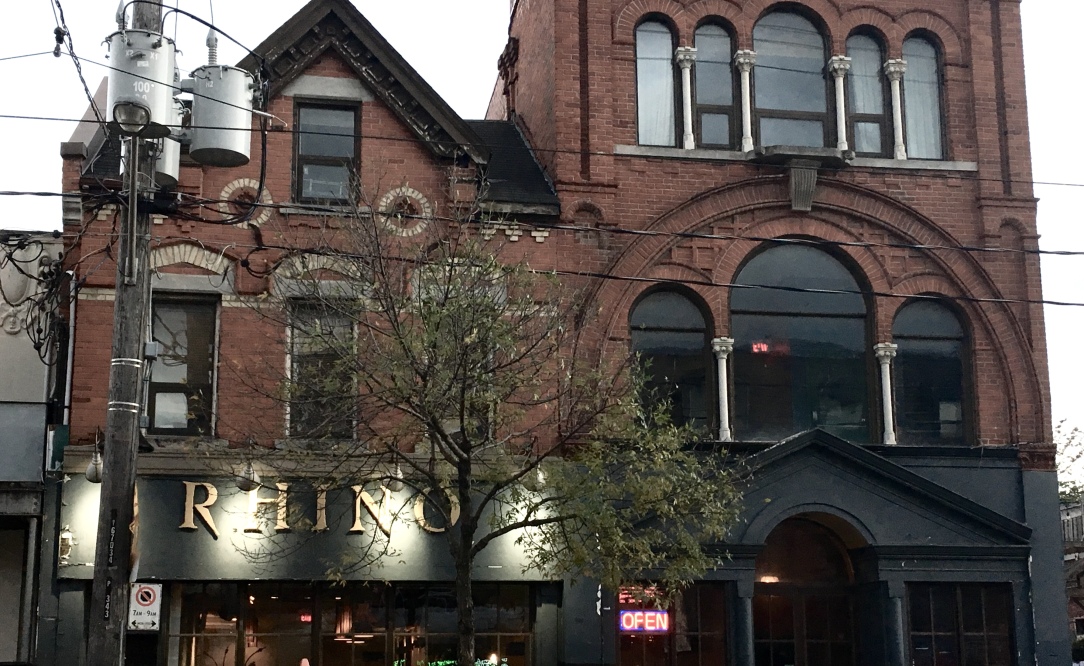 The longer I’m doing this Sober October, the more time I just spend sitting around people who drink. I’m not talking about working behind the bar.

Yesterday, for example, I spent the day with my partner and some friends. Over the course of the night I visited three different bars, and drank three different alcohol-free beverages.

We first stopped into Black Rock Coffee Bar. I had a black sesame latte, and everyone drank Mill Street West Coast IPA. After that the group migrated over to one of the many Korean restaurants in the neighbourhood. No drinks were had there. With sustenance in our stomachs we went down the street to The Lab. The Lab is a cheap Annex bar that draws a student crowd from University of Toronto. There I inquired for a non-alcoholic beer, and bought a Erdinger for six dollars.

I don’t know why I haven’t sought out non-alcoholic beer before. When I was growing up my parents would drink Beck’s non-alcoholic beer. The German Erdinger, which is readily available, tasted malty and sweet. It’s definitely lacking something quintessentially beer in its flavour, but that’s likely the alcohol flavour itself.

The day ended with my partner and I sitting in Kanu. Kanu is a dive bar in the west end, and it’s a bar for simple but serious drinkers. The idea of stopping in for a drink seemed ludicrous. While my partner socialized at the bar, I sipped on a soda water with lime. I used my time somewhat wisely to study up the liquor list, the cocktails, and specialty shots for my new job.

Going to the bar sucks for non-drinkers. More and more places are putting work into alcohol-free options. A big step is an alcohol-free option on tap (kombucha and non-alcoholic beer please!), especially if the venue has a great craft beer selection. This might seem counterintuitive for some bar managers and owners, but honestly if a venue advertised this I believe it would sell.

The Rhino continues to slowly kill me with their incredible beer cellar. After drinking a non-alcoholic beer last night I did look forward to this tasting. I thought I had a number of high-ABV, dark, malty Belgian beers beforehand. This time around, known as The Rhino Beer Tasting 2.0, Emily had picked out six new Belgian ales. This along with a few local/North American brews totalled at 12 beers.

Since it was our second take on the experience the group of us knew how to streamline it. This time around we grabbed biodegradable plastic sample cups, instead of commandeering all the bar’s water glasses. One pitcher for water to cleanse the palate, and one pitcher for dumping leftover beer. When doing big tastings like this I find it’s important to keep the consumption to a minimum. The whole point of doing these tastings is to be able to describe the product to guests. Learning different tasting notes and common descriptor vocabulary is much different than wine. Each style has descriptors typical of the that category, but each one varies greatly.

Belgian beer, which is the bulk of what we’ve been tasting, typically has little to no hop character. This is incredibly appealing to most palates, especially for guests who usually steer away from beer. I could go on about all the things I love about Belgian beer, but actually I should give you some examples. Below are a couple of my personal favourites from the tasting.

This beer has a cute label on it with a horned billy goat. For the duration of the tasting we referred to it as ‘the goat beer.’ I wanted to mention this beer first, because it’s a good entry-beer for guests new to the style. The goat beer is approachable, malty, not too sweet, and finishes with some nice spice. It undergoes secondary fermentation in the bottle, so it might have some sediments.

This one stood out due to its fruity character. To Emily and myself we commented on how it tasted like it was aged in a red wine barrel, with French oak. The website doesn’t state what type of barrel it was aged in, but does mention second fermentation in the bottle and barrel. Definitely appealing to wine drinkers. It’s light in colour, low in carbonation, and has a slight sour finish. This is a beer that takes kind to aging, and if you have one laying around I would recommend storing it in a cool,, dry place for at least six months to allow further character to develop.

This one stood out due to the fact we had already tried Mill Street’s barley wine, and found this much more pleasing to our palates. The four of us doing the tasting felt especially interested in this beer as the label described it as, ‘Barley Wine aged in Calvados Barrels.’ Calvados is an apple brandy from Normandy, France. This means fruit, french oak, and sweetness from the spirit will all impart their flavours in the beer. This is one of my favourites, because of its Christmas spice reminiscent of mulled wine. Notable flavour ingredients include bitter orange, cinnamon, cloves, quince, and juniper berries.

This saison went in the opposite direction than the Bush Pilot’s Stormy Monday. This beer had floral right off the nose, and felt super light in body with lovely high carbonation. It has a mild sour character to it on the crisp finish, with strong bright stone fruit notes (think apricots). The arctic herbs in this brew are Labrador tea, Small Labrador tea, and Crowberry leaves. Now this beer has a great story behind it, so please check out the Bush Pilot website for details on the legendary Inuik bush pilot Johnny May.

After some quick research I realize this is a limited edition beer. According to Beer Advocate, the beer was only brewed once, and isn’t even listed on the brewery’s website [hyperlink]. This is for experienced beer drinkers only! The brew is heavy, dark, smooth, and has a pleasant aroma of baked goods on the nose (think chocolate chip cookies). It’s a bit on the sweeter side, as stouts* go, but has a slight bittering finish. The high alcohol content warms you up, and adds to the sipping character of this brew.

*Please note that Beer Advocate lists this beer as an American Strong Ale, but at the tasting we classified it as an Imperial Stout. This is due to the ABV, colour, and tasting notes we got from the beer. Since it is no longer listed on the website I can’t fact check from the brewery.

This was the first beer we tasted, and it goes on this list because it still stood out after our tasting was done. The beer has a beautiful ruby colour paired with strong malts, caramel notes, toasted malts, dried fruit, and slight liquorice. The beer also has a great spice finish that lingers, and this gives it more of a complex feel. This would appeal to experienced beer drinkers looking for something more interesting in this style.