Labatt and Molson push out local brews with their own grapefruit Radlers.

By jessendersmorton in Uncategorized on August 8, 2017
No comments

The Radler, a beer and juice cocktail in a can, is ideal for the hot and humid weather of Toronto. The refreshing fruit juice, coupled with carbonation and low ABV, make the perfect beach drink. Enjoy a cold one in the sand without risking heat stroke. Since it’s just a summer drink, the Radler is only available seasonally. Over the past few summers the LCBO has been gifted with imports from Europe, and offerings from local breweries. This year the bigger Canadian breweries jumped on the Radler train giving us Rickard’s Radler from Molson, and the Bud Light Radler from Labatt. Moosehead, Canada’s oldest independent brewery, also has a seasonal Radler. Unfortunately, I couldn’t find it on any of my recent LCBO excursions.

Introduction of these new world Radlers into the LCBO market makes a fight for shelf space. Unfortunately seasonal brews get a limited section of the store, and consequently push out the more interesting local libations. An example being Amsterdam Brewhouse’s Sweetwater Squeeze Radler. This stands out from it’s compatriots by employing blood orange juice. However, it’s getting increasingly difficult to find on the LCBO shelves, as Labatt and Molson products are pushing it out. In my search for this Amsterdam Radler I spoke with a LCBO employee who mentioned the traditional Radler uses white grapefruit, while the new Radlers use pink grapefruit juice. This means a tart beer cocktail versus a sweet beer cocktail respectively. As someone who prefers a Campari and Soda – I’m not a fan of Molson and Labatt making overly sweet cocktail in a can.

Labatt’s Shock Top masquerading as a micro-brew type of beer further aggravates this situation of pushing out local breweries. They pretty much have the only commercially-made Shandy on the shelves. This year Shock Top’s own Citrus Radler joined the ranks of Bud Light and Rickard’s. Consequently, I tried this after sampling some of my preferred picks (detailed below) over the course of a couple days. Shock Top’s contribution was the most underwhelming out of all of them. It’s easy-drinking, sour, and really dominates on the grapefruit flavour. The drawbacks being this Radler tastes like that store-bought pink grapefruit cocktail. This means that the juices were probably from concentrate. This brew, like most Radlers, is more easily found at the beer store in Ontario.

Below are my recommendations for Radler’s to drink in what’s left of summer. 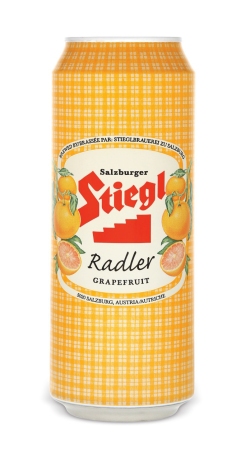 This is the most easily-attainable Radler, and my first recommendation to those new to the Radler scene. I see it everywhere, it’s usually at the LCBO (seriously), and often one of the first to pop up at the beginning of the season. This Radler features grapefruit, lemon, and orange juices. Pale orange in colour, tart, medium carbonation, and rather cloudy. It’s probably unfiltered. Good for those who don’t like wheaty beers.

Available in: 473 ml Can at the Amsterdam Brewing bottle shop.

I couldn’t get this one at the LCBO, as Molson and Labatt have pushed it out. I first discovered it on the cold beer section two years ago. From what I remember it’s not overly sweet, but a good alternative for those who don’t like grapefruit. If you can get your hands on it, please give it a try. 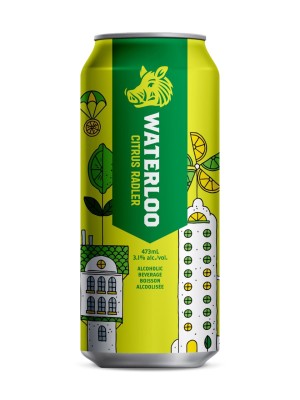 Brewed By: The Brick Brewing Cider

Available in: 473 ml Can at the LBCO or Beer Store

This is the local equivalent to Stiegl’s Grapefruit. It’s got the tartness, more on the grapefruit, lower on the carbonation. Easy-drinking, not overly fruity, and light. A good indication of the quality of ingredients with this one is there’s some visible sediments on the bottom of the glass – meaning fresh fruit juices. Not sure if it’s white or pink grapefruit, as the Waterloo Brewing website doesn’t specify. 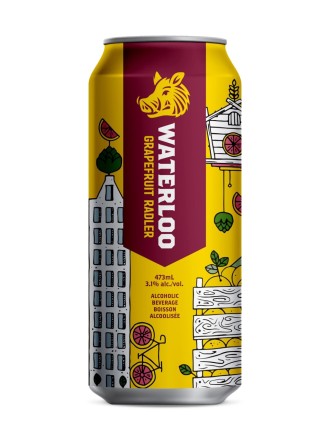 Brewed By: The Brick Brewing Cider

This is the next best thing to a Shandy. Waterloo Citrus Radler combines their lager with fresh lemon, lime and apple juices. Instead of your typical lemonade, the radler features more tartness from the other juices. This makes it more complex, and of course offers an alternative those who don’t like grapefruit. This stands out as a little more complex, as you can taste the lager. Easy-drinking, good carbonation, and well-balanced.

MAKE YOUR OWN SHANDY

Use any light summertime beer. Wheat beers, IPAs, and light lagers work well here. Don’t use a beer that’s already on the sweeter side, or if it’s high on the IBUs.

MAKE YOUR OWN RADLER

Used the method of:

** You can swap out the grapefruit juice for something sweeter, like fresh orange juice, or unfiltered apple juice, in which case you’d nix the simple syrup altogether. Feel free to experiment with other canned juice sodas, or use the Italian Soda method with high-quality syrups like Monin.

Rye Bianco Boulevardier
Showing my love for Woodford Reserve after a lovely virtual tasting of whisky and chocolate. I’ve been a fan of the Double Oaked expression of Woodford for a few years. Strong flavours of orchard fruit, and incredible sweetness from double barrel ageing.
Looking for a wintertime Vesper? It’s also alcohol-free. Had a lot of fun with this one. Cheers to you folks on a Sober Sunday!
Bailey Downs
This cocktail is a rewrite of an older recipe. The older recipe was actually an adaptation from Beetle House’s (Tim Burton-themed bar in NYC) cocktail menu. That drink is called This Is Halloween, a reference to The Nightmare Before Christmas. So I guess this is an adaptation of an adaptation? The idea was to make this version a little more grown up, with ingredients that are easy to sub-in, find, or make.
Loading Comments...
%d bloggers like this: